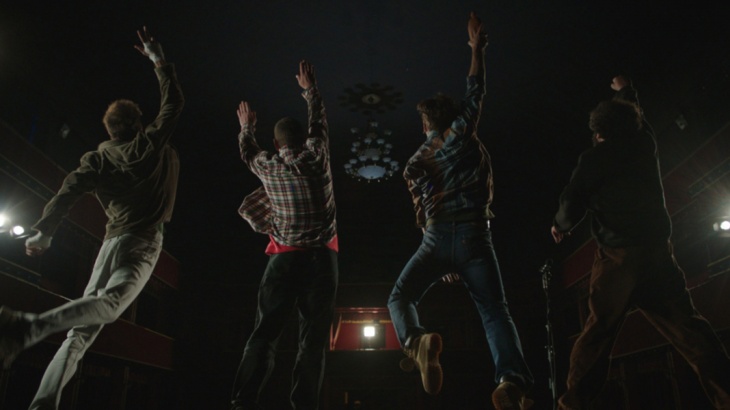 “Flying Circus” based on a real event, premiere in Tirana at the festival “Dea open air”

The film “Flying Circus” directed by Fatos Berisha had its premiere in Tirana, on the first evening of the seventh edition of the film festival “Dea open air”. The film written and directed by Fatos Berisha competes in the seventh edition of this international film festival. “Flying Circus” appeared in Tirana a few days after receiving the main prize “Grand Jury Prix”, at the film festival “War on Screen IFF” in Chalons-en-Champagne, which took place in France.

The film was premiered last night and is competing in “Dea open air”. “Flying Circus” started its international journey last year with the world premiere in Tallinn, Estonia, to continue at the “Santa Barbara International Film Festival” in California, where it triumphed as “Best International Film”. “Flying Circus” is a project that brings together actors from Kosovo and Albania in its events. As a producer, Vjosa Berisha, a few hours before the premiere, said that the film has had a journey so far with different evaluations in international festivals, but it is also important to participate in the seventh edition of “Dea open air”. We just won the Grand Prix de Jury in France, we received the Best Film award in Santa Barbara in January, the Best Film award in Fabrique du Cinema in Italy in December 2019, and now in France at the War on Screen festival we won the main prize. The premiere of “Flying Circus” in Albania has a special significance for our film, because 80 percent of it was shot in Albania and a large part of the team comes from Albania. We are very happy to open the “Dea” festival. We especially thank the Municipality of Tirana, which has offered us a great help during the filming and the festival director Edmond Topi for the selection of the “Flying Circus”, to open the festival “, says the producer Vjosa Berisha, who adds that they hope that soon the film will also appear in cinemas in Albania